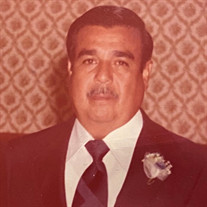 WESLACO - Antonio “Tony” Leal Sr., 91, beloved husband, father, grandfather, great-grandfather, great-great-grandfather, brother, uncle and friend entered into the glory of his eternal life on Thursday, April 30, 2020, peacefully in his sleep. He had the blessing of visiting with his grandchildren and great-grandchildren the weekend prior. A rare opportunity to say good-bye to his loved ones. He was born on September 3, 1928, in Driscoll, TX, to the late Luciano and Maria Magdalena Leal. He is also preceded in death by his wife Juanita R. Leal and son Antonio Leal, Jr. Tony was a lifelong employee of Kerr-McGee until his retirement. His favorite past-time was fishing and spending time with his grandchildren, great-grandchildren and great-great-grandchildren. He was a quiet man who enjoyed westerns, watching the news, and keeping up with the weather. Left behind to eternally treasure their memories of him are his daughters Lupita Talbert (Rick) and Leticia Leal (David); sister Lucy Leal; grandchildren Priscilla A. Perez (J.D.), Nicole Hernandez (Sergio J.), Laura J. Clark (R.J.), Anthony R. "Bobby" Talbert (Shelby), and Anthony J. Leal; great-grandchildren Natasha M. Abalos (Poly II), Ayden A. Fuentes, Austin I. Fuentes, Annabelle N. Leal, Justin Hernandez, Jayson Hernandez and Easton D. Perez; great-great-grandchildren Sophia E. Abalos and Policarpio “Trace” Abalos, III; and several nieces, nephews, and other extended family members. A funeral Mass will be celebrated at a later date for family and friends. Interment will follow at Highland Memorial Park in Weslaco. Having the distinguished honor to serve as pallbearers will be Bobby Talbert, R.J. Clark, IV, Sergio J. Hernandez, Poly Abalos, II, J.D. Perez, Ayden Fuentes and Arnaldo Fuentes. Honorary pallbearers are Tony’s great-grandsons, Austin, Easton, Justin, Jayson, and his great-great-grandchildren Sophia and Trace. The family extends a special thanks to Bersy Trevino for her years of care for both Tony and Juanita.

The family of Antonio Leal Sr. created this Life Tributes page to make it easy to share your memories.

Send flowers to the Leal family.