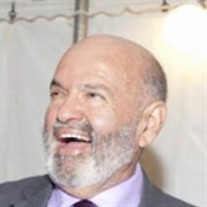 Weslaco-Armando Guadalupe Alvarado, 67, passed away on Tuesday, July 27th, 2021 at Methodist Hospital Richardson. Armando Guadalupe Alvarado was born to Felicitas Alvarado in Weslaco, Texas. His mother, and grandmother Adela Garcia, passed while he was young. He was taken in and raised by his grandfather Carlos Garcia and his older brother, Servando Gutierrez. He was a joyful child growing up who knew what hard work was at an early age. He developed his love for movies and tv during this time. His work earnings would go to his family, but he always kept a little for himself to go to the Weslaco movie theater. He graduated from Weslaco High School and worked at Knapp Hospital until he came across Alfred Dirks of Dirks’ Electric where he learned to be an electrician. If Armando wasn’t zooming around in the green Dirks truck, he was often seen working after hours in his red Datsun. When Mr. Dirks retired, Armando, who was mostly known as “Mando,” took over the electrical company and rebranded it as Direct Electric, which he ran for 20 years. He was husband to Elpidia, father to Marie and Carlos, grandfather to De’Andre Thompson, Robyn and Raven, and great grandfather to Justice. He was a friend to many in and around the Rio Grande Valley, one who many knew would be there to help them at whatever hour. There are countless stories of Armando offering his talents as an electrician to those in need at a discount, in trade, or often just performing the work for free. One to always tell a joke or regale with stories, he will continue being the jokester and storyteller in Heaven, where he went on Tuesday, July 27th. His memory will live on in the hearts and minds of his family, and those who knew him.

The family of Armando Guadalupe Alvarado created this Life Tributes page to make it easy to share your memories.

Send flowers to the Alvarado family.