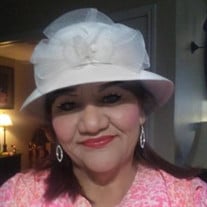 Weslaco-Diana Rodriguez, 65, passed away after a lengthy illness on Wednesday, June 2, 2021, at Weslaco Nursing & Rehab. On October 25, 1955, Diana was born to Samuel Ramon and Guadalupe Villarreal Ramon in Santa Maria, Texas. Diana grew up in the Santa Maria area. When she was a young teenager, she attended a softball game in Bluetown, when she caught the attention of Gilbert Rodriguez, and in Gilbert's own words, "it was love at first sight." Diana was not so sure, but Gilbert was relentless, and he finally convinced Diana to be his wife in 1973. Gilbert worked in agriculture and construction. He always worked hard so Diana could stay home and care for their two daughters, Lupita and Ruby. Diana was a great mom; she always referred to her daughters as "the wind beneath her wings," her only two special girls. One of Diana's favorite pastimes was watching her Spanish Novelas. She also loved to listen to Tejano music. Jay Perez was one of her favorites. Diana loved to cook and enjoy her creations. Diana loved a great barbecue with family and friends, and she was always the "life of the party." Diana filled any room or occasion with laughter, she always had a joke ready when it got quiet, and it wasn't a party without Diana. Diana loved pets. Diana's last baby was a chihuahua that she rescued, Gracie. Diana and Gracie were inseparable, and Diana spoiled Gracie with gifts and unconditional love. One of Diana's most critical decisions later in life was to get baptized and become a born-again Christian. Diana allowed God to come into her heart and change her life for the better, which was evident to her family and friends. Diana was loving and, at times, brutally honest. She taught her children to be strong and courageous but loving and kind. Diana is preceded in death by her parents, Samuel and Guadalupe Roman, husband, Gilbert Rodriguez, brothers, Jose Ramon, Samuel Ramon Jr., sisters, Criselda Cuevas, Elida Sustaita, and Irene Moreno, and her beloved chihuahua, Gracie. She is survived by her daughters, Lupita Vallejo (Robert) of Progreso and Ruby Ortiz (Daniel) of Weslaco, grandchildren, Jonathan Vallejo, Marc Vallejo, and Andrew Vallejo, Ernest Casas, Kaylee Casas, and Danika Ortiz, sisters, Elvira Ponce (Manuel+) of San Antonio, Elvia Del Bosque (Rolando+) of San Antonio, Simona Gonzales (Lupe) of Santa Rosa, and Delia Ramon of Santa Rosa. Visitation will be Sunday, June 6th, 2pm-9 pm, at McCaleb Funeral Home in Weslaco. A celebration of life will be Monday, June 7th, 10 am, at McCaleb Funeral Home, followed by burial at Sacred Park Cemetery in Mercedes.

The family of Diana Rodriguez created this Life Tributes page to make it easy to share your memories.

Weslaco-Diana Rodriguez, 65, passed away after a lengthy illness...