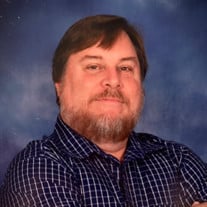 Gregory David Townsend, 63, passed away at McAllen Medical Center on Friday, July 17, 2020. He was born on March 1, 1957 in Evansville, Indiana to Nancy Jane (née Jandebeur) and the late Ralph Richard Townsend. As a child he was fascinated with NASA’s Apollo Missions, Star Trek, and being a Boy Scout—a passion that he maintained throughout his whole life. In the mid-1980s, he moved to the Rio Grande Valley (RGV) and spent the last 30 years living in Donna, Texas. He was a teacher for 17 years at the Donna Independent School District and spent more than 10 years as a teacher at various private schools throughout the RGV. He was also a Choir Director at the First United Methodist Church (FUMC) of Donna. He had a powerful singing voice that had been nurtured as a teen during the 4 years he spent with the Young World singers, and through this experience he was afforded the opportunity to sing on the steps of the White House in 1972. He also enjoyed numerous summers teaching Vacation Bible School at FUMC, but his greatest joy was serving as Scoutmaster for Troop 244 in Donna. He mentored 10 Scouts to obtain their Eagle Scout rank, and loved every second of his summers at Camp Perry. In 2002, he extended an invitation to a troop from Irapuato, Mexico, and over 6 Scoutmasters and 34 Boy Scouts joined Troop 244 that year at camp. His troop in Donna along with their parents came together to help host the scouts in a wonderful display of international camaraderie and community furthering the values of the Scout Law. Mr. “T”, as all his students called him, loved to teach, often spending hours in the evenings and weekends preparing lesson plans and developing creative ways for his students to learn. He was adamant that his students not take the path of least resistance and wanted them to aim for the moon. He was also artistic and loved to draw and bead, and in a role that he never imagined, but after having personal experience with one Donna Indian Sweetheart, he was asked by an additional 10 of Donna’s Indian Sweethearts to help with the design of their fringe that would become part of their traditional overlay. He is survived by his partner of nearly 3 decades, Yolanda M. Curry of Donna, his mother Nancy Jane Townsend Bush Barner of Newburgh, IN, his sister Elizabeth Haas (Greg) of Newburgh, IN, his nieces: Aimee McBride, Julie Crossley, Sarah Wongler, Eva Sherfick, Theresa Haas, Rebekah Haas, his nephew Lucas Haas, his son Joshua Townsend (Juanita) of Edinburg, TX, his grandsons Anthony and Shaun, a host of grandnieces and grandnephews, and his soul brother Dale Talarzyk. Lastly, in an endearing role to the lives of Yhislaine Dimas and her two children (Troy and Isabella), Gersson Viniegra, and Jennifer Curry (Zachary), he was and always will be their “Greggy”. He is preceded in death by his father Ralph Richard Townsend. During this time of public health uncertainty, the Curry and Townsend families are so grateful for your well wishes, but to maintain the safety of our family and friends we ask for your continued prayers from the safety of your home. A memorial service will be held in person to celebrate Greg’s life when doing so will not put our community at risk. Mr. “T” may the Great Scoutmaster of all Scouts be with you now and forever.

Gregory David Townsend, 63, passed away at McAllen Medical Center on Friday, July 17, 2020. He was born on March 1, 1957 in Evansville, Indiana to Nancy Jane (née Jandebeur) and the late Ralph Richard Townsend. As a child he was fascinated... View Obituary & Service Information

The family of Gregory David Townsend created this Life Tributes page to make it easy to share your memories.

Send flowers to the Townsend family.