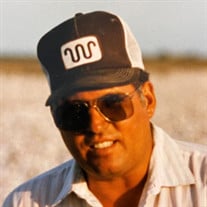 Lyford - Harold Dean Parker was 72 when he passed away on Saturday, August 21, 2021, at his residence in Lyford. Harold Dean was born to Alton and Ava Parker of Santa Monica, Texas on February 18, 1949. He was fond of saying that his education at SMU (Santa Monica University) prepared him for life. There he grew up on his family’s farm, working in the fields, trailing cattle on horseback, and roping anything he could get close enough to rope. When Harold was in 2nd grade his mom asked him why he had Brenda Brown’s baseball glove; he replied, “Mom, that’s my baseball glove.” The southpaw athlete that turned his head in elementary school would become the love of his life. Harold and Brenda were married on May 30, 1970, and shared life’s ups and downs for 51 years as husband and wife. In 1967 Harold graduated from Lyford High School, where he was active in sports, 4-H, and FFA, showing cattle and competing in local calf roping events. He received an Agriculture Science degree from Southwest Texas State in San Marcos, Texas. Over the years, Harold taught Agricultural Science in Rio Hondo, Harlingen, Texas State Technical College, and Lyford; in all of these stops along the way, Mr. Parker helped students attain success in the classroom, show ring, and in various leadership competitions. People from all walks of life report owing their success to the influence Mr. Parker had upon their story. After this distinguished teaching career, Harold left the classroom to farm and raise cattle full-time for 25 years. In the second half of his farming career, Harold answered the call to bi-vocationally pastor the First Baptist Church of Santa Rosa from 2007-2018. Harold was awarded a Lifetime Achievement Award from the Willacy County Soil and Water Conservation Board and inducted into the Willacy County Livestock Show Hall of Fame and most recently, was inducted into the Agriculture Teacher’s Association of Texas Hall of Fame. Throughout his life as an Ag-Science teacher, school board president, farmer, and pastor, Harold influenced many lives and certainly had a major impact on the agriculture industry in the Rio Grande Valley. Harold wore many different hats in his lifetime. Over the years he was a husband, father, grandfather, brother, uncle, teacher, mentor, pastor, friend, and countless other things to many people. In all these roles, Harold encouraged, challenged, loved, and inspired people to be their best. Harold was preceded in death by his parents, Alton and Ava Parker, and his sister, Kathy Bates. He is survived by his wife, Brenda; his sons and daughters-in-law: Bryan and Kim Parker, Steven and Lisa Parker, and Andrew and Heather Parker; his eight grandchildren: Morgan, Hudson, Nathan, Toby, Casey, Micah, Hayden, and Haley; his brother and sister-in-law John and Pam Parker; his brother-in-law Larry Bates; his sister-in-law Becky Banks; and his nieces and nephews. Raising his family in the love of the Lord Jesus Christ has been Harold Parker’s greatest legacy. The Parker family would like to extend special gratitude to PA Mike Gonzales and the loving nurses who helped care for him at the end of his days: Diana Ramos, Ana Suarez, Jessie Herrera, and Noe Reyes. A time of visitation with Harold’s family will be held at McCaleb Funeral Home on Wednesday, August 25th from 4:00-8:00 pm and a service celebrating his life will be held on Thursday at 10:00 AM at First Baptist Church of Weslaco (600 S. Kansas Avenue, Weslaco, TX) with Reverend Raymond Sanchez officiating. In lieu of flowers, the Parker family asks that donations be made to First Baptist Church Weslaco. The eight grandchildren will be serving as their pop’s honorary pallbearers.

Lyford - Harold Dean Parker was 72 when he passed away on Saturday, August 21, 2021, at his residence in Lyford. Harold Dean was born to Alton and Ava Parker of Santa Monica, Texas on February 18, 1949. He was fond of saying that his education... View Obituary & Service Information

The family of Harold Dean Parker created this Life Tributes page to make it easy to share your memories.

Lyford - Harold Dean Parker was 72 when he passed away on Saturday,...

Send flowers to the Parker family.