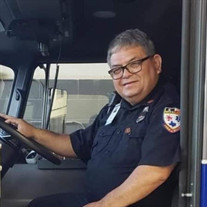 WESLACO - Jesus “Jesse” De la Rosa Jr., 55, passed away on Saturday, August 8, 2020. Jesse was born on May 22, 1965 to Jesus de la Rosa Sr. and Ester S. Gutierrez in Weslaco, TX. Jessie grew up in Weslaco with four siblings, Elizabeth, Elsa, Elvia, and Jaime. He thrived in football and was a proud Weslaco Panther, class of 1983. Jesse married his high school sweetheart, Sylvia Molina, on July 27, 1985. They had two children, Sean and Jason. In October of 1988, Jesse joined the Weslaco Fire Department, where he faithfully served as a first responder for the rest of his life. Firefighting was Jesse’s full-time career and passion, but he also found time for several other part-time jobs, all service-oriented. He worked as a Nurse’s Assistant for Knapp Medical Center and an Emergency Medical Service responder for South Star, Border, Vida, Med-Care, and Guardian EMS Services. Jesse loved was a history buff and loved watching historical documentaries. He also enjoyed fishing, sharpening and collecting knives, and collecting unique toys. His polished leather boots were his signature, and Jesse never left home without polished boots. He loved to travel, and he and Sylvia took priceless vacations together. Jesse was a true hero. He was a great mentor to his friends, colleagues, and children. Jesse was a great provider, a devoted husband, and a father. His legacy of dedication and service to the Weslaco Community will always be a part of this community. Jesse is preceded in death by his father, Jesus De la Rosa Sr., brother, Jaime De la Rosa. He is survived by his mom, Ester De la Rosa, wife of thirty-five years, Sylvia, sons, Sean De la Rosa (Stephanie Uresti) and Jason De la Rosa, granddaughter, Skye De la Rosa, sisters, Elizabeth Gonzalez (Armando), Elsa Torres (Joel), and Elvia De La Rosa. Visitation will be Friday, August 14th, 3:00-9:00pm, with a Celebration of Life at 6:00pm at McCaleb Funeral Home in Weslaco. Burial will be Saturday, August 15, at 10:00am at Highland Memorial Park. Funeral arrangements are under the care of McCaleb Funeral Home of Weslaco.

The family of Jesus "Jesse" De la Rosa Jr. created this Life Tributes page to make it easy to share your memories.