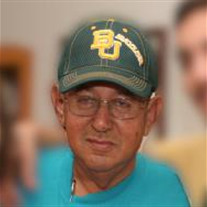 Johnny M. Cruz, 81, of Weslaco, Texas, went to be with the Lord while at St. Joseph’s Hospital in Bryan, Texas on May 7, 2022. Johnny was born on April 8, 1941, in Bay City, Texas. As a child, he was raised by Margarito and Katarina Ramirez in Austwell, Texas. He enjoyed dancing when growing up. It was at a dance hall in Ganado, Texas that he met and fell in love with Florencia Martinez. The two married on April 20, 1961, at St. Joan of Arc in Weslaco, Texas. Johnny and Florencia had three daughters: Mary Elizabeth, Sandra, and Teresa (Terry). Johnny is survived by his daughters, Mary Elizabeth Martinez, Sandra (Carlos) Leiva, and Terry (Craig) Garrett. Grandchildren: Cynthia Lopez, Luis Martinez, Jr., Lionel Martinez, Gabriela (Matt) Ortega, Kathy Boyce, and Lizette Leiva. Great-grandchildren: Luis Eugenio Lopez, Luis Martinez, III, Isabella Ortega, Delmer Martinez, Jr., Maribel Ortega, and Lionel Martinez, Jr. He is preceded in death by his parents, grandparents, wife, Florencia Cruz, son-in-law Luis Martinez, and his grandson Stephen Clyde Garrett. During Johnny’s lifetime, he worked at Medical Arts Building as a custodian, First National Bank as a “handyman”, and for the City of Weslaco as a meter man. After his loving wife’s passing, he moved to Hempstead, Texas to be closer to his daughters and grandchildren. Johnny always enjoyed joking with family and friends. He loved fishing and watching football and baseball. He was a big Dallas Cowboys, Houston Astros, and Baylor Bears fan. Johnny was also a coin collector and often liked showing his collection to family. His pride and joy were not material things, but rather his grandchildren, whom he enjoyed playing with and spending time with. Visitation will be held Wednesday at McCaleb Funeral Home from 3 p.m to 7p.m., with a rosary at 7 PM. Funeral mass will be held at San Martin de Porres Catholic Church on Thursday, May 12 at 10 a.m. Interment services will follow at Weslaco City Cemetery. Pallbearers: Carlos Leiva, Luis Martinez, Jr., Lionel Martinez, Lizette Leiva, Luis Eujenio Lopez, Roy Campa; Honorary Pallbearers: Craig Garrett, Delmer Martinez, Jr.

The family of Johnny M. Cruz created this Life Tributes page to make it easy to share your memories.

Send flowers to the Cruz family.