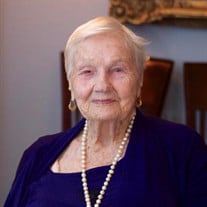 Weslaco, Texas - Josephine Jeanette Marie Marks, 99, passed away on Tuesday, August 4, 2020, at John Knox Village in Weslaco. She was born in Los Angeles, California, on June 1, 1921, to John Giltsch and Rosalia Scherer Glitsch. She married Richard Theodore Marks in December 1940 and they raised three children. Josephine was studying to be a teacher at San Francisco State and her husband Richard was a tropical horticulturist recently graduated from University of California when they met. It was love at first sight and they married 4 months later. After buying their first starter home in Merced, California and with two small boys, Richard was hired by Del Monte Foods to take on the task, together with a handful of other DM employees, to re-build a pineapple plantation on the Island of Mindanao, Philippines which had been bombed out during the war. Their daughter Kathleen was born on the plantation a year later. This assignment, which lasted almost 15 years, was the first of many exciting assignments spanning 30 years which took them all over the world. After the Philippines they lived in the San Francisco Bay Area, then Mexico, were in Spain for a one-year sabatical and lastly Thika, Kenya. After 9 years living in Thika, Kenya Richard was diagnosed with ALS and passed away in San Francisco in 1980. Josephine, now a widow, returned to the US after 30 years living abroad. Josephine and Richard were both very adventurous and Josephine particularly jumped into each new assignment with enthusiasm. The family was always on the go, living life to the fullest and Josephine took every opportunity to encourage her children to learn about and respect other cultures. They visited most of the countries in the Orient, Far East, Europe and South America and took many special trips. They took a photographic safari in Africa, visited live volcanos, traveled the oceons on freighters and luxury liners and flew in DC3 and DC10s, weathering typhoons at sea and refueling on remote airstrips. Josephine and Richard also visited most of the world capitals and as both were fun-loving and gregarious, made life-long friends all over the world. Josephine was a great cook, seamstress and gardener. Everything she planted grew and bloomed. She loved to read and kept detailed journals her entire life. She was an animal advocate and a cancer survivor, never ceasing to learn and always up for a challenge. Each break of dawn was a miracle, each sunset the ending to a perfect day, rain or shine, she would say. She worked tirelessly to make sure her husband and children were cared for and they were the joy of her life. When interviewed several years ago and asked about her greatest achievement, she answered it was her family. Josephine is preceded by her parents, John and Rosalia Giltsch, husband, Richard Theodore Marks, and son, Richard T. Marks, Jr. Her family members that survive her are children Raymond Harpor Marks (Bonnie) of Lincoln, California, Kathleen Gibler (Nick) of McAllen, Texas, and daughter-in- law Liz Marks of Seattle, Washington, grandchildren, Richard (Laura) of McAllen, Carlos Alberto (Gabriela) of Monterrey, Mexico, Nicholas (Laura) of Los Angeles, Jackie Marks (Orlando) of Corpus Christi, Texas and Raymond Marks Jr. (Terai) of French Polynesia and 19 great-grandchildren.

The family of Josephine Marks created this Life Tributes page to make it easy to share your memories.

Send flowers to the Marks family.