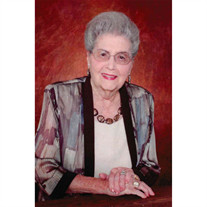 WESLACO - Margaret Russell, age 98, passed away on Wednesday, December 13th, 2017 at John Knox Health Center in Weslaco, Texas. She was born on November 8, 1919, in Houston, Texas, to Rosamond Graham and Richard Donaldson Rowley. Margaret grew up in Houston and Clinton, Louisiana. She came to Weslaco as the bride of Reeves Russell in 1939. She was a devoted wife and mother. She was a leader in Brownies, Girl Scouts, and Cubs and served on the Scout board. She was a PTA president, homeroom mother, and a band booster. Margaret also worked in her husband's businesses, Burton Auto Supply and Russell Bearing and Auto Supply. In the community, she served on the Weslaco Salvation Army Board and the Hidalgo County Crippled Children's Board. She was a life member of the Weslaco Museum Board and the Knapp Hospital Auxiliary. Margaret's interest in genealogy led her to trace her ancestors to their arrival in North America in 1640. She was a member of the Daughters of the American Colonists, Daughters of the American Revolution, Daughters of the War of 1812, Daughters of the Confederacy, and president of her Colonial Dames Chapter. Margaret's family has happy memories of 4th of July family reunions at South Padre Island where they built one of the first homes. Her zest for living had her family traveling 48 states. She also had her pilot's license, completed coursework for a realtor's license, and was an accomplished artist. Because of their love for the Lord, for many years she and Reeves were involved in Texas Baptist Border Missions building churches and going on medical missions in Mexico. Margaret was preceded in death by her beloved husband of 61 years Reeves Russell, son Richard Neal Russell, son-in-law Gerry States, and all of her siblings: Richard, Vertna, Evelyn, Marjorie and their spouses. She was also predeceased by her brothers-in-law Hugh, Grady, and Virgil Russell. She is survived by her daughter Jeanel Smith and husband George, daughter Evelyn States, daughter-in-law Regina Russell. She is also survived by nine grandchildren: Shannon (Leslie) Drawe, Julie Smith, Amy (Benjamin) Pontius, Shane, Shelly and Steven States, Bryan Russell, Melissa (Cameron) Carter, Sarah (Dean) Chrestman. She is survived by 12 great-grandchildren: AnnahBeth and Jared States, Kate, Luke, and Levi Pontius, Kimberly Lee, Cole and Callen Carter, Claire, Andrew, and Caroline Chrestman, and Zack Russell. She is also survived by numerous nieces and nephews. Margaret's family would like to acknowledge her friends and caretakers at John Knox Village and especially her pastor Vernon Ellsworth. Funeral arrangements are under the care of McCaleb Funeral Home of Weslaco.

The family of Margaret Russell created this Life Tributes page to make it easy to share your memories.

Send flowers to the Russell family.