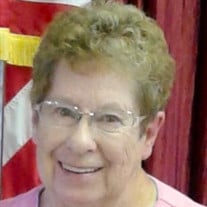 Weslaco- Marilyn Farmer, 87, entered into the gates of Heaven on Monday, September 23, 2019. She was born on September 15, 1932, to James "Lucky" Williams and Eunice Mary Blunk Williams in Ottawa, Kansas. Marilyn was the second daughter in a family of three girls and two boys. They grew up in the small town of Ottawa, where she graduated from high school. During high school, she played competitive basketball in the local church league and was in charge of the high school newspaper and yearbook. Marilyn was married right after high school and had a son named Mike. The marriage itself was brief, and Marilyn became a single mom. Marilyn was never afraid of work or her ability to keep up with peers, even of the opposite sex. Her first career was with the Kansas City Core of Engineers, one of the few single women able to raise a child and manage a full-time job in that era. Marilyn was never comfortable with average and was always striving to learn and experience more. She left her career and became an entrepreneur operating several successful businesses. During this time she was an avid dancer who enjoying square, line, and ballroom dancing. She also was a very competitive bowler in several leagues and once bowled on television. In her early retirement years, like her mother opened an antique shop. It was her last business venture, thinking it might be somewhat “slower,” LOL, but slow was never Marilyn's style. She had a ten thousand foot showroom stocked full of unique and sought after antiques and was open seven days a week. Marilyn finally slowed down enough to retire at Leisure World in Weslaco in 1999. It didn't take long for the people at the park to appreciate Marilyn and her constant stream of energy, which was certainly an asset when it came time for volunteers. Everything Marilyn did was always done "all-out" to the best of her ability. She was always a very competitive individual, always looking for the next challenge but mostly liked spending time with her friends. Marilyn loved sports and enjoyed watching most games, but baseball and football were her favorites. She had season tickets for the Kansas City Royals for many years. Living life to the fullest, outgoing and gregarious, always on the move, never wasting a drop out of her God-given full 24 hour day. Marilyn is preceded in death by her parents Lucky Sr. and Eunice Williams, sister Virginia Lee Corder (Lyle+), and brothers Thomas Joseph Williams, and James "Lucky" Williams Jr. She is survived by her son, Mike Farmer, and wife, Gwen, sister, Shirly Ann Woods (Bill+), three grandsons, Travis Scott, Reid Allen, and Cody James Farmer, and one great-granddaughter, Navah Fay Farmer. Marilyn will always be remembered for her desire to join in a game, activity, or social event. She had many friends who became her second family. Those who knew her will cherish those memories forever. Leisure World will never be the same without her.

Weslaco- Marilyn Farmer, 87, entered into the gates of Heaven on Monday, September 23, 2019. She was born on September 15, 1932, to James "Lucky" Williams and Eunice Mary Blunk Williams in Ottawa, Kansas. Marilyn was the second daughter in a... View Obituary & Service Information

The family of Marilyn Farmer created this Life Tributes page to make it easy to share your memories.

Weslaco- Marilyn Farmer, 87, entered into the gates of Heaven...

Send flowers to the Farmer family.