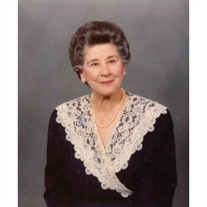 Weslaco- Mary Louise Lucas, 98, passed away on Thursday, December 28th, 2016. She was born on November 2, 1918, to Mary and Arthur Clagett Sr. in Kerr, Arkansas. Her father was in the army and they moved back to Donna in February 1919. She graduated from Donna High School in 1936. She started college, but dropped out to raise her two children working as a switch board operator for Southwestern Bell. Mary Lou was determined to get her degree, so she went back to college with her oldest daughter and got her Bachelor's in Education with a minor in music. She taught music and reading at PSJA for a few years and Zavala Elementary School in McAllen, where she retired after 21 years of service. Mary had a lasting love of her God given musical talents to be given freely to her home church, as she was a founding member, First Baptist Church of Pharr. She played for church services, wedding, funerals and revivals, where she served as a pianist and organist for 65 years. She is a past member of Valley View School Board. Mary Lou is preceded in death by her parents, Mary and Arthur, 2 brothers, Arthur F. Clagett Jr., Weldon K "Sonny Boy" Clagett, 1 sister, Margaret E Snell, son-in-law, Melvin D. Free, and granddaughter, Melanie Free Keaton. She is survived by her son, Edwin Lucas (Joann), of Rockport, daughters, Mary "Liz" Free, of Weslaco, and Patricia L. Green (David), of Haiki, Hawaii, grandchildren, Christine Green, Catherine Green, both of Haiki, Hawaii, Brenda Holley (Jeff), of Corpus Christi, Susan Reed (Don), of Bay City, Lee Free of Woodsboro, Jeff Lucas (Sherry), of Dallas, Cindy Kobbe (Chuck) of Baltimore, MD, 14, great grandchildren, and three great-great grandchildren, sister, Dorris Parkhill, and sister in law, Dorothy Clagett. The family would like to offer a special thank you to Ramona Rosales, Juanita Lozano, and the John Knox Village med center staff. In Lieu of flowers, the family requests that donations be made to the Gideons, at www.gideons.org or charity of your choice. Mary Lou will long be remembered as a faithful servant of Christ, a loving mother, grandmother and friend. Visitation will be held on Friday, December 30th, from 2-5pm, at McCaleb Funeral Home Chapel. Funeral services will be held on Saturday, December 31st, at 10 am, at McCaleb Funeral Home, with Dr. Rev. Steven Parker officiating. Serving as pallbearers will be Donald Reed, Jeff Holley, Kevin Free, Charles Barber, Roger Browkoski, and Lee Fee. Funeral arrangements are under the care of McCaleb Funeral Home of Weslaco.

Weslaco- Mary Louise Lucas, 98, passed away on Thursday, December 28th, 2016. She was born on November 2, 1918, to Mary and Arthur Clagett Sr. in Kerr, Arkansas. Her father was in the army and they moved back to Donna in February 1919. She graduated... View Obituary & Service Information

The family of Mary Louise Lucas created this Life Tributes page to make it easy to share your memories.

Send flowers to the Lucas family.