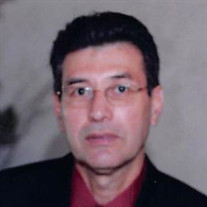 Mercedes/Arlington, TX: Miguel Gonzalez Jr., 73, passed away at his home in Arlington, surrounded by family after a courageous battle with cancer, on Sunday, January 23, 2022. Miguel was born on November 24, 1948, to Miguel and Silvina (Perales) Gonzalez in Mercedes, Texas. Miguel grew up in Mercedes and was the eldest of eleven siblings. Miguel and his family worked as migrants when they were young, and Miguel learned to appreciate the value of a hard day's work when he was just a child. Miguel set the example for his younger siblings, working at local businesses when they were not migrating up North. Miguel held a job from the time he was a young kid until December 2021. Growing up in Mercedes, Miguel naturally attended the Rio Grande Valley Livestock Show and looked forward to it every year. Miguel's enthusiasm for rodeos continued into adulthood, and he attended the Dallas State Fair annually. When he was back home during Livestock Show week, he always made time to visit. Miguel enjoyed photography and the beauty of nature. He loved music and collecting classic records, like the Beatles and Elvis Presley. Miguel also played the guitar, and he and his friends had a local band. Miguel and Elma enjoyed traveling during their twenty-four years of marriage, taking trips all over the United States, visiting Elvis Presley's home in Memphis, Florida, Las Vegas, Arkansas, Oklahoma, and South Padre Island. Miguel's favorite vacation spot was the beach, where he could relax and go fishing with his brothers. He also loved visiting his hometown, Mercedes, and spending time with family and friends. Every time Miguel would come for a visit, he made a point to reach out and surprise an old friend. Holidays were unique spending time in the valley with family or with his children and grandchildren. Miguel enjoyed a good laugh. He never got tired of watching Three Stooges and Tarzan. He loved the Dallas Cowboys and was fortunate enough to attend a few games with his children. Miguel's favorite pastime was working on cars. He loved motorsports and often attended local airshows, but his Ford Thunderbird was a work in progress and his number one project. Miguel was a man of Christ. He led by example, showing a genuine interest in others being kind and compassionate. Miguel was a loving father to his children and was the first to help when they were in need. Miguel treasured his children and grandchildren, and he and Elma looked forward to their visits. Miguel was so proud of their educational and career accomplishments. His daughter Amy earned a Bachelor's degree in Business while raising a family and working, and his son, Miguel III, is a Technical Sergeant in the Airforce. His grandchildren, though still young, were well on their way to becoming successful, and Miguel bragged on them whenever he had a chance. The Gonzalez family created priceless memories over holidays, birthdays, and countless trips to Braum's ice cream shop. Miguel is preceded in death by his father, Miguel Gonzalez Sr., brother, Venancio Gonzalez, sister, Delia Maria Gonzalez, and daughter, Michelle Rose Gonzalez. He is survived by his mom, Silvina Gonzalez, his loving wife, Elma Gonzalez, daughter, Amy Gonzalez Boydston (Chris), son, Miguel Gonzalez III, grandchildren, Chandler Sutton McDonald, Ethan Sage Mills, Britni Rose McDonald, Cameron Sage McDonald, Dylan Scott Boydston, and Corbin Michael Gonzalez, great-grandchildren Madison, Braydon, and Brantley Franco, sisters, Gloria de Los Santos (Lucio), Ester Gonzalez (Richard), Rosalinda Casarez (Esteban), Sylvia Gonzales (Milo), Nohemi Infante (Eduardo), Maria Elena Briones (Juvenal), brothers, Ruben Gonzalez and Armando Gonzalez (Sylvia), sister in law (widow of Venancio), Alma Gonzalez, and numerous nieces and nephews. On Friday, January 28, Visitation will be 9 am-9 pm at McCaleb Funeral Home, with a prayer service at 7 pm. A celebration of life will be Saturday, January 29th, 10 am, at McCaleb Funeral Home, followed by burial at Highland Memorial Park. Prayer service and celebration of life will be streamed via youtube/mccalebfuneralhome, and burial will be streamed via Facebooklive/mccalebfuneralhome

Mercedes/Arlington, TX: Miguel Gonzalez Jr., 73, passed away at his home in Arlington, surrounded by family after a courageous battle with cancer, on Sunday, January 23, 2022. Miguel was born on November 24, 1948, to Miguel and Silvina (Perales)... View Obituary & Service Information

The family of Miguel Gonzalez created this Life Tributes page to make it easy to share your memories.

Send flowers to the Gonzalez family.