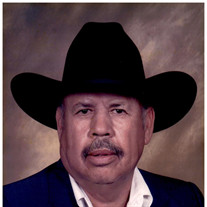 Oscar Lopez Hernandez, 82, died peacefully and surrounded by loved ones in his Weslaco home on March 7, 2021. Oscar (fondly referred to as Oscarito or JD) was born on March 1, 1939 to Manuel Lopez and Prudencia Hernandez in Tepehuaje, Tamaulipas, Mexico. He was raised in Weslaco, Texas where he attended school and met a petite and beautiful brown-eyed girl: Hermelinda (Nina) Ochoa Campos. He admired her from afar until finally summoning up enough courage to tell her she was beautiful; she thought the same of him. The couple was happily married on October 5th, 1959, and built an extraordinary life together. Oscar valued work, self-sufficiency, and contribution. He was a migrant worker who helped his family as a young boy and teenager. Once he married Nina, he provided for her and his five daughters beyond their basic needs. He spent many years working for McManus Produce in Weslaco but wanted more for his family. He combined his hobbies of cooking, baking, and crafting with Nina’s entrepreneurial spirit and the couple operated Carmenina’s Catering and G&L Upholstery. The couple was a great team, and God blessed their businesses as they worked together to create more opportunities for their daughters including the completion of a doctorate, three master’s, and four bachelor’s degrees. Oscar loved music and movement and he danced without regard for convention. He enjoyed being outdoors, fishing, walking, traveling, and working out. He visited friends often and loved to help others. He had a beautiful smile, harmonious laugh, and a penchant for playing pranks in person or over the phone. Oscar was a smart and self-educated man who was great at problem-solving and fixing things. He was resourceful and persistent, and his outlook on life remained optimistic in all circumstances. Oscar was a devout Roman Catholic, and his faith was the guiding force throughout his life. He led by example and honored God in his daily life through prayer and proper living. He held the Blessed Mother Mary, St. Jude, St. Juan Diego, and the Sacred Heart close to his heart. He believed in the resurrection and life everlasting. Oscar is preceded in death by his parents, Manuel and Prudencia Lopez, and his brother, Victor Lopez, his sister, Nasaria G. ‘Sara’ Martinez, and grandchild, Aaron Armando Ventura. He is survived by his loving wife of sixty-one years, Hermelinda, whom he diligently cared for during the last twenty-one years of his life, his siblings: Ramona García, Amanda Jimenez, Herminia De Leon, Margarita Chapa, Manuel Lopez, Omar Lopez, and Ramon Garcia, his daughters, Nellie Garcia (Virgil), of The Woodlands, Texas, Norma Rosales (Rudy), Maria Ventura (Herman), Dr. Esmeralda López (Nicolas Pizarro), and Veronica Gonzalez (Adrian), all of Richmond, Texas, his grandchildren Adrian Alexander Ventura, Andrea Marie Ventura, Eric Nicholas Rosales, Ashley Nicolle Parsons, Alexica María Gebhart, Allyssa Gabriela García, Alexis Colby García, Gianmarcel Pizarro, and Lorenzo Lee Gonzalez. His great-grandchildren: Alexander Christof Ventura, Eve Lane Ventura, Aubree Lynn Rosales, Alayna Marie Rosales, Parker Leland Gebhart, and Julian Joel Rosales. Visitation will be Saturday, March 13th, and Sunday, March 14th, 1-9 pm, with a rosary on both days at 6 pm. Sunday's rosary will be live-streamed via youtube. Mass will be celebrated Monday, March 15th, 10 am, at St. Pius X Catholic Church in Weslaco, followed by burial at Highland Memorial Park, also live-streamed via Facebook.

Oscar Lopez Hernandez, 82, died peacefully and surrounded by loved ones in his Weslaco home on March 7, 2021. Oscar (fondly referred to as Oscarito or JD) was born on March 1, 1939 to Manuel Lopez and Prudencia Hernandez in Tepehuaje, Tamaulipas,... View Obituary & Service Information

The family of Oscar Lopez Hernandez created this Life Tributes page to make it easy to share your memories.

Send flowers to the Hernandez family.