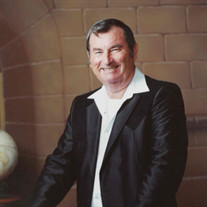 Weslaco-Pablo Peña Jr., 87, passed away at his home in Donna, surrounded by his children and wife, on Saturday, April 3rd, 2021. Pablo was born on August 23, 1933 to Pablo Peña Sr. and Feliza A. Chapa in Weslaco, Texas. Pablo joined the US Marine Corps when he was eighteen years old. After being honorably discharged, he returned to Weslaco and began building his life with his wife, Aminta Pena and started his family of six children. He started working and building his career in construction. Pablo eventually built and opened his own lumber yard that complemented his construction business. Pablo acquired many properties which he flipped, sold and rented them out. He taught several of his daughters and son the construction business and they went on to run successful companies of their own. He was very proud of all his children. In his later years, he developed what would become his proudest project, Pena-Westgate Crossing, a business/retail plaza located on N Westgate Drive, across from Home Depot in Weslaco, which remains a thriving plaza in Weslaco today. Pablo was very proud to have achieved great success in his life with only a 6th grade education. Pablo loved his family and loved to travel. He took his family on vacations to almost every state in the USA, Mexico and Canada on road trips that they enjoyed so much. He worked hard and earned every vacation they took. Pablo taught his children great work ethic, the love and closeness of family and to never, never give up. He never wanted his children to suffer the way his mother, he, his sisters and brothers did when they were young. Pablo was one of a kind! His children loved him and will miss him dearly. Pablo is preceded in death by his parents Pablo Peña Sr. and Feliz A. Chapa, his first wife and mother of his six children, Aminta Peña, son, Pablo Peña IV, sisters, Carmelina Sepulveda, Carolina Peña, and brothers, Ezekiel Garza and Medardo Garza. He is survived by his wife, Dorothy Gonzalez, children, Feliza Taylor (Johnny), Anna Lila Peña, Aminta Cuellar (Rafael), Raquel Peña, Sarita Peña (Omar “Marty” Champion), Pablo Peña III (Miriam), daughter in law, Mayra Peña, grandchildren, Willis John Taylor Jr., Bobbi Polvado, Jacob Henry Taylor, James Nicholas Taylor, Andrew L. Martinez, Aaron L.Martinez, Anthony L.Martinez, and Armando L. “A.J.” Martinez, Rogelio Cuellar, Linda Cuellar, and Rafael “R.D.” Cuellar, Laura Raquel Vega, Robert Trejo Jr., Eric Trejo, Pablo Peña V, Noel Peña, Amy Casares, JoLynn Vallejo, Shelby Peña, Caleb Peña, Dante Peña, and Darian Peña, great-grandchildren, Aalyah, Jessica, and Stella Martinez, Matthew Taylor Mendoza, Brody Mack Polvado, Vincent, Zelda, and Cammy Casares, Frankie and Jude Garza, Adison Vega, and Robert “Robby” Trejo III. Arrangements will be private.

Weslaco-Pablo Peña Jr., 87, passed away at his home in Donna, surrounded by his children and wife, on Saturday, April 3rd, 2021. Pablo was born on August 23, 1933 to Pablo Peña Sr. and Feliza A. Chapa in Weslaco, Texas. Pablo joined the US... View Obituary & Service Information

The family of Pablo Peña Jr. created this Life Tributes page to make it easy to share your memories.

Send flowers to the Peña family.