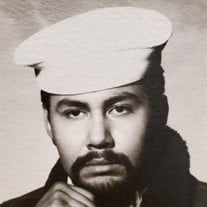 Weslaco: Raul Garza Sr., 62, passed away at his home in Weslaco on Tuesday, March 2nd, 2021. Raul was born on July 30, 1958, to David Garza Sr. and Irene Andaverde in Mercedes, Texas. Raul grew up in Weslaco and joined the US Navy immediately after high school. Raul was brilliant and quickly worked his way to U.S. Navy, Machinist Mate, 3rd Class Petty Officer. After being honorably discharged, Raul returned to Weslaco, where he met his soulmate, Juanita Escamilla, on a blind date. They were married on May 12, 1978, and spent the rest of their lives together. Raul was driven and goal-oriented. He always seemed to be working on his next achievement and wasn't satisfied with being average. Raul joined the Weslaco Fire Department as a firefighter and worked his way up the ladder once again. Raul was promoted to arson investigator and then became Weslaco's first Fire Marshal ever. When Fire Marshal's position opened up, one requirement was for Raul to become a Police Officer, so Raul attended the police academy. Not only was Raul successful in completing the requirements, but he also graduated valedictorian of his class. Raul retired from the position of Weslaco Fire Marshall after fifteen years of service. He then took a position as a firefighter at the US Fish and Wildlife Service for five years. Raul loved the outdoors, spending time at the beach, camping, and fishing. It was only natural that after he retired, he went to work at the Valley Nature Center. Raul enjoyed riding his motorcycle, and the freedom, friendships, and stress relief his hobby helped him fulfill. Raul gave his life to Christ at the Mid Valley Men's Conference. He was a devout Catholic and was a member of the "Bikers for Christ" and a longtime member of Hidalgo County Veteran's Court. Raul loved to barbecue for friends and family. He also enjoyed cooking and baking so much that he decided to attend culinary school later in life. Raul was loving, friendly, and outgoing. He was passionate about life and everything it had to offer. He loved his grandchildren and spending time with them, especially during the holidays. Raul and his siblings were also very close and remained good friends throughout their lives. Raul is preceded in death by his parents, David Sr. and Irene Garza, and sister, Maria Petra Juarez, nephews William David Garza and Benito Herrera. He is survived by his loving wife of forty-two years, Juanita "Janie" Garza, sons, Mark A. Escamilla (Monica) of Corpus Cristi, Raul Garza Jr. (Sandra) of Weslaco, and James Garza of Weslaco, grandchildren, Mark Anthony Jr. (Brittany) Escamilla, Andrew, and Isaiah Escamilla, Ramiro, Brianna, and Brittany, Judah, Sarah, and Marissa Rodriguez, great-grandchild, Cameron Escamilla, brother, David Garza Jr. of North Carolina, sisters, Mary Vasquez of Weslaco, and Amalia Garza of Florida, numerous nephews and nieces. Visitation will be Tuesday, March 9th, 2021, from 12 pm-9 pm, with a rosary at 6 pm, followed by sharing memories. Mass will be celebrated on Wednesday, March 10th, 11 am, at St. Pius X Catholic Church in Weslaco, followed by burial with full military rights at Rio Grande Valley State Cemetery in Mission.

Weslaco: Raul Garza Sr., 62, passed away at his home in Weslaco on Tuesday, March 2nd, 2021. Raul was born on July 30, 1958, to David Garza Sr. and Irene Andaverde in Mercedes, Texas. Raul grew up in Weslaco and joined the US Navy immediately... View Obituary & Service Information

The family of Raul Garza Sr. created this Life Tributes page to make it easy to share your memories.