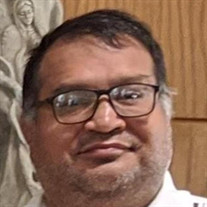 Weslaco: Adrian Rodriguez, 54, passed away suddenly at McAllen Medical Center on December 23, 2020. On January 5, 1966, Adrian was born to Enrique V. Rodriguez and Sulema Quesada Rodriguez in Mercedes, Texas. For many years with his brother, Ismael, Adrian worked for Texas Palm Trees and Irrigation LLC in Dallas, Texas. He moved back to Weslaco in 2015 to help care for his mom. That was the kind of guy Adrian was. He had a big heart and would give the shirt off his back to anyone, so Adrian didn't hesitate when his mom was in need. Adrian loved going fishing and a good barbecue. He was an avid gardener and had a green thumb. Adrian always saw the best in everyone and was one of the most loveable guys you could ever meet. He adored his nieces and nephews. Adrian is preceded in death by his father, Enrique Rodriguez, and his brother, Daniel Rodriguez. His mom survives him, Sulema Q. Rodriguez, brothers, Enrique Rodriguez Jr. (Carmen) of Weslaco, Ismael Rodriguez of Dallas, David Raul Rodriguez (Ashley) of Kennedale, sister, Delila S. Trevino (Eliseo), uncles, Gregorio Quesada, Frank Quesada Jr., aunts, Tina Elizondo, Delfina Rodriguez, Enedelia Campos, and numerous nieces and nephews. Visitation will be Sunday, December 27th, 1 pm-9 pm at McCaleb Funeral Home, with a prayer service at 7 pm. A celebration of life will be Monday, December 28, at 2 pm, at McCaleb Funeral Home. Burial will follow at Highland Memorial Park in Weslaco. Services will be streamed on youtube/mccalebfuneralhome.

Weslaco: Adrian Rodriguez, 54, passed away suddenly at McAllen Medical Center on December 23, 2020. On January 5, 1966, Adrian was born to Enrique V. Rodriguez and Sulema Quesada Rodriguez in Mercedes, Texas. For many years with his brother,... View Obituary & Service Information

The family of Adrian Rodriguez created this Life Tributes page to make it easy to share your memories.