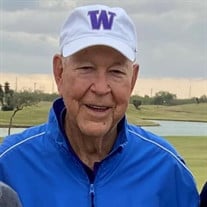 Weslaco: Bobby Lee Lackey passed away peacefully at John Knox Village in Weslaco on Thursday, September 2, 2021. Bobby was born on October 14, 1937, to Charles W. and Rosie Balleu Lackey. The youngest of ten children, Bobby grew up in Weslaco. His athletic abilities were evident from an early age. At Weslaco High School, he was an exceptional multi-sport athlete; With Bobby at quarterback, the Panthers made four straight playoff appearances, including an unprecedented trip to the Class 2A state semifinals in 1955, where Bobby earned First Team All-State Honors. Bobby's baseball talent attracted many professional scouts to local baseball games. And his basketball skills took the Panthers deep into the playoffs and earned him all-state honors in that sport as well. He led the valley in scoring all four years of high school. Heavily recruited in multiple sports, Bobby ultimately chose the University of Texas, earning a starting quarterback position for the Texas Longhorns under a young, newly hired head coach: Darrell Royal. In the summer before his freshman year at Texas, he met and instantly fell in love with Judy McManus while visiting her younger brother, who had been badly injured in an accident. In August 1957, just after the conclusion of Bobby's freshman year, they were married in Cloudcroft, New Mexico. A standout Longhorn by any measure, Bobby led Texas to a share of the 1959 Southwest Conference Championship and their highest national ranking in more than a decade. Bobby famously propelled the Horns to a dramatic victory over Oklahoma University in 1959, a game in which he threw the winning touchdown pass, kicked a tie breaking extra point and, playing defense, intercepted an OU pass on the Sooners' final drive. Contrary to local legend, he did not sell popcorn at halftime. In the process, a long OU winning streak was broken; Bobby became the first Texas quarterback to appear on the cover of Sports Illustrated and cemented his status as a Texas athletic legend. After graduation, Bobby signed with the Pittsburgh Steelers in 1960 to play quarterback in the newly-formed American Football league. But after a few months with the team, he knew his heart was in South Texas and decided to forego a professional football career. Instead, he returned to Weslaco to begin his career working for his father-in-law at J.S. McManus Produce Company and to raise his family. That marked the beginning of a business career in which Bobby ultimately would own and operate McManus Produce and take on a leadership position in the South Texas produce business, serving as President of the Texas Fruit and Vegetable Association. Later, he served on the board of directors for Freeport-McMoran, one of the World's largest publicly traded mining companies, a position he held for more than 25 years. He had numerous other business interests, including Lackey-Fisher Chevrolet, a car dealership in Raymondville which he opened in 1977 with the assistance of his brother, Joe. Bobby left such an indelible mark on his community that many would begin to refer to it as WesLackeyCo. Among his numerous public and private leadership roles, Bobby served on the Weslaco City Council from 1964-1969 and the Weslaco School Board from 1968-1974. He was Weslaco's Man of the Year in 1972. The Weslaco Independent School District named the gymnasium after Bobby in the mid-1970s. In September 2002, Weslaco ISD renamed the football stadium in his honor. For decades, The top male athlete at Weslaco High School has been awarded the Bobby Lackey Award. Among his other accolades, Bobby was inducted to UT Hall of Honor in 1977, the Rio Grande Valley Sports Hall of Fame in 1990, and to the Texas High School Football Hall of Fame in 2011. Once his career in other sports concluded, Bobby turned his athletic energies to golf. Despite picking up the sport as an adult, Bobby became a top-flight amateur golfer. His passion for the sport was foundational both for innumerable friendships and a Lackey golf tradition which both continues unabated to this day and, undoubtedly, like so many things about Bobby, will echo through his family for generations. After retiring in 2001, Bobby and Judy moved to Spring to be closer to their daughters. Later, Bobby moved back to Weslaco after Judy's passing in 2020, spending more time with his son, John, the Weslaco family, and many South Texas friends. At the time of his death, Bobby was secure in his faith and looking forward to his reunion with Judy, the love of his life and partner of 63 years. Bobby is preceded in death by his parents, Charles and Rosie Lackey, his loving wife of sixty-three years, Judy, brothers, Huey, Bill, Louis, Joe, and Charles Lackey, sisters, Rosie Mahrick, Ruby Harrison, and Mae Walker. Bobby is survived by his three children, John and his wife Melissa Lackey, Lissa Hartley and Mindy Kaase; his nine grandchildren and their spouses, Corey and Allison Hartley, Krissa and Robb Maddox, Kyle and Monica Kaase, Bryan and Skye-Lynn Kaase, Kevin and Hanna Hartley, Garrison and Rachel Lackey, Michelle and Alex Cosart, Calvin and Jody Lackey, and Austin Lackey; his eleven great-grandchildren, Amelia Lackey, Hayes Kaase, Ashtyn Lackey, Emmett Kaase, Kaiser Kaase, Hartley Maddox, Hudsyn Maddox and Ellie Hartley, Emery Hartley, Weston Pinckard, Mack Hartley and numerous nieces and nephews. A celebration of life for Bobby Lackey will be held on September 16th, 7 pm, at Bobby Lackey Stadium in Weslaco. The family would like people to wear purple and white or orange and white to honor Bobby's alma matters. Live streaming will begin at 7:00 p.m., https://www.youtube.com/watch?v=I2j12gD_B7s Donations can be made to: The Bobby Lackey Scholarship Fund C/O: JGKL LAW FIRM 2300 W Pike Blvd # 300 Weslaco, TX 78596

The family of Bobby Lackey created this Life Tributes page to make it easy to share your memories.