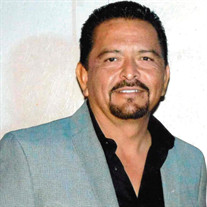 Weslaco: Frank Gonzales Jr., 54, passed away at his home, surrounded by loved ones, on Wednesday, April 13, 2022, after a courageous battle with cancer. On December 29, 1967, Frank was born to Francisco Lionel Sr. and Maria Natividad (Martinez) Gonzales in Eaton Rapids, Michigan. Frank's family moved to the Rio Grande Valley when Frank was a child. They settled in Weslaco, Texas, and started farming. Frank's family opened Texana Pickle Producers in the late 1970s, and farming became a way of life for the Gonzales family. Texana Pickle Producers was a thriving business, a brand well-known and recognized for its quality products. Frank embraced the profession of farming and the reward of reaping what you sow. He eventually went to work for Texana Pickle Producers, where he spent most of his career. Frank was a social guy and enjoyed spending time with family and friends. He had a barbecue most weekends, and everyone was welcome. Frank's "salt of the earth" personality and positive attitude were a magnet for large gatherings, and Frank never met a stranger. Frank loved fishing, hunting, golf, and singing karaoke. However, he was most passionate about family. Frank's hobbies were competitive and fun but included creating lifelong friendships and priceless memories. Frank was a wise man and could carry on a conversation about any topic. He was a great provider, husband, and father. Frank demonstrated true character, loyalty, and faith. Frank is preceded in death by his mom, Maria Natividad Martinez, and brother, Mike Gonzales. He is survived by his loving wife, Sylvia Gonzales, his father, Francisco Lionel Gonzales Sr., his sons, Frank Lionel Gonzales III (Cecilia) of Weslaco, Jason Almaraz (Claire) of Leander, Texas, daughters, Angel Gonzales (Joe McKennen), Bianca Almaraz, both of Weslaco, sisters, Teresa Gonzales (Banks Barbee), Malena De la Pena (Todd Kettelkamp), Dolores "Dee Dee" Regino (Arnold), and Diana Gonzales, grandchildren, Emma Gonzales, Ravena Jiminez Olivia Gonzalez, and Ryan Rodriguez. On Saturday, April 16th, 10 am -3 pm, Visitation will be at McCaleb Funeral Home in Weslaco.

Weslaco: Frank Gonzales Jr., 54, passed away at his home, surrounded by loved ones, on Wednesday, April 13, 2022, after a courageous battle with cancer. On December 29, 1967, Frank was born to Francisco Lionel Sr. and Maria... View Obituary & Service Information

The family of Frank Gonzales Jr. created this Life Tributes page to make it easy to share your memories.

Weslaco: Frank Gonzales Jr., 54, passed away at his home, surrounded...

Send flowers to the Gonzales family.