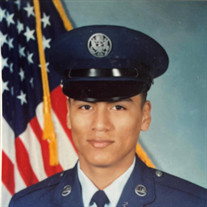 Sacramento, CA/ Weslaco: Joel Ocañas, 52, passed away on February 10th, 2022 at Mercy San Juan Hospital in Sacramento. Joel was born on January 21st, 1970 in Weslaco, Texas. After graduating from high school, Joel joined the US Airforce and served for seven years. Joel spent the rest of his life in the Sacramento area. He earned an associates degree in ecological control and opened a pest control company, Eco-Guard, which he successfully managed for sixteen years. Joel loved playing golf, going to concerts, and watching football, especially the San Francisco 49rs. He was most passionate about supporting his only son, Yngwie’s endurance running. Joel was a proud father. Joel lived life to the fullest making the most out of every occasion. He had a lot of fun and had a huge heart. Joel was generous and was the first to lend a helping hand. Joel was very patriotic and when Yngwie decided to follow in dad’s footsteps and joined the US Navy, Joel was Ecstatic. Joel is preceded in death by his grandma, Dominga Gutierrez and brother, Daniel Ocañas. Joel is survived by his mom, Dominga “Minga” Ocañas, son, Yngwie Ocañas, life partner and best friend, Lizbeth Cordier, brothers, Jose G. “Pio” Ocañas, David Ocañas, Jose I. “Nachi” Ocañas. Visitation will be Tuesday, February 22nd, 10am-9pm, with a prayer service at 2pm, at McCaleb Funeral Home. Burial will be Wednesday, February 23rd, 3pm, at Highland Memorial Park. Serving as pallbearers will be Jose “Pio” Ocañas, David Ocañas, Jose “Nachi” Ocañas, Javier Villarreal, Joe Ocañas Jr., and Yngwie Ocañas.

The family of Joel Ocañas created this Life Tributes page to make it easy to share your memories.

Send flowers to the Ocañas family.