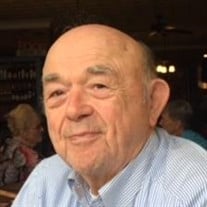 Larry Taylor Lowe, 84, of McAllen, Texas passed away peacefully in his home on April 12, 2021. He was battling prostate cancer and was in the mid-stages of Alzheimer’s. Larry was the oldest of 6 children. He was born on August 6, 1936, in Martin County, North Carolina. He graduated in the top 10 percent of his high school class in Edenton, N.C. in 1954 and went on to achieve a B.A. in International Relations from the Naval Postgraduate School in Monterey, CA, and an M.S. in Foreign Affairs at George Washington University in Washington, D.C. He was also a graduate of the National War College in Washington, D.C. where he received an Alumni Award for his Research and Writing. Larry served in the U.S. Navy from 1957, joining as an Aviation Cadet in Pensacola, Florida, until 1988 when he retired in the role of Defense Attaché as a Captain. He held a long and distinguished naval career including positions as commanding officer of several units, Naval Attaché with the American Embassy in Pakistan, and Defense Attaché with the American Embassy in Tokyo. Over the course of his 31-year career, he was awarded several medals and awards including Legion of Merit, National Defense Superior Service Medal, National Defense Meritorious Service Medal, and the Korea Air Medal. Larry was the epitome of patience and kindness to both his family and others. His accomplishments never overshadowed his greatest one ~ his family. He was a kind and loving partner to his spouse Leona of 49 years as well as an amazing father to his five children and a proud grandfather to his 6 grandchildren. He loved nothing better than to have his family gathered. Every year he was able, he and Leona attended the Lowe Family Reunion held every July 4th where his large clan gathered and celebrated together. The gathering had significance for Larry both as a family gathering and as the celebration of America’s independence. He is survived by his spouse, Leona; daughters Stephanie Dragon, Lisa Williams, and Linda Johnson; daughters-in-laws Margaret (Wheatley, remarried) and Janine Lowe; sons-in-law Kerry Dragon, Steve Williams, Ross Johnson; and grandchildren Ashley, Erin, Jonathan, Tyler, Zachary and Aaron and his dearly loved dog, Yuki. Larry’s death was preceded by two of his sons, Robert E. Lowe (1996) and Ronald R. Lowe (2007). Larry will be buried with full honors at Arlington National Cemetery in Virginia in mid-October 2021. Please send memorial donations to Alzheimer's Association National Capital Area Chapter. 8180 Greensboro Drive, Suite 400. McLean, VA 22102; (703)-359-4440.

Larry Taylor Lowe, 84, of McAllen, Texas passed away peacefully in his home on April 12, 2021. He was battling prostate cancer and was in the mid-stages of Alzheimer&#8217;s. Larry was the oldest of 6 children. He was born on August 6, 1936,... View Obituary & Service Information

The family of Larry T. Lowe created this Life Tributes page to make it easy to share your memories.

Send flowers to the Lowe family.