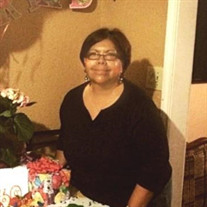 Weslaco- Sylvia B. Chavez, 65, earned her wings on October 10, 2020. On April 23, 1955, Sylvia was born to Santos Bazan and Maria Puente Bazan in Weslaco, Texas. Sylvia was the fifth child of eight. She grew up in Weslaco and was neighbors with her future husband, Jose Luis Chavez. After graduating from Weslaco High school, Sylvia attended college and studied nursing. She also married Jose, and they had two children, Velma, and Jose Jr. Caring for others came naturally to Sylvia, so she instinctively chose to pursue a career in the medical field where she cared and nurtured others within and throughout her life. For a few years, Sylvia worked in a Donna clinic before she began working with Dr. Cepeda at his office in Weslaco. She helped countless families and “mom’s to be” in her thirty-plus years of service. Sylvia was a pillar of strength, and inspiring others was her passion and gift. She not only encouraged her children and grandchildren to do all and be all that they could be, but everyone who crossed paths with Sylvia would feel the encouragement and support that she naturally conveyed. Sylvia dearly loved her Husband, children and grandchildren. She would continuously sign up her grandsons for t-ball, coach pitch, baseball, wrestling, soccer, basketball and football. She also attended every one of their events and was the proudest, loving and loudest cheering fan. When the grandchildren got older, Sylvia would follow the school buses all over the valley and the state to cheer them on, and there was nothing that would interfere with her supporting their competition. Sylvia had a big family; she and her sister, Carmen Balderas (the only two girls) were always close. They traveled together all over the country and the world. They visited Spain, Hawaii, Canada, New York, Pennsylvania, and Cozumel just to name a few. Sylvia lived life to the fullest and was able to experience some of life’s most incredible, memorable adventures. Sylvia was a woman of immense faith. She was a devout Catholic, she attended mass weekly and prayed not only for herself, nor to only her family and friends but to all and everyone every morning, day and night. She had a personal relationship with Jesus Christ, and He helped her through two battles with Lymphoma cancer. Sylvia never complained. She never showed fear. Instead, she remained faithful, optimistic and courageous. A real example to the very definition of perseverance. Sylvia is preceded in death by her parents, Santos and Maria Bazan. She is survived by her loving husband of 45 years, Jose Luis Chavez Sr. Her daughter, Velma Lopez. Her son, Jose Luis Chavez Jr. (Denise Adame) and her grandchildren, Leola Mireya Chavez. Natalia Anna Lee Chavez. Aaron Anthony Lopez (Stephanie Alaniz) and Adrian Lopez. Also, her great-grandchildren, Ayven Andrew and Ayden Anthony Lopez. Her brothers, Joe Bazan (Maria) of Weslaco, Antonio Bazan (Josie) of Donna, Santos Bazan (Juana) of Weslaco, Carlos Bazan (Elida) of Weslaco, Manuel Bazan (Letty) of Dallas, Martin Bazan (Ofie) of Weslaco/Illinois and her sister, Carmen Balderas (Juan) of Dallas, and numerous nephews and nieces. Visitation will be Thursday, October 15th, 10am - 9pm, with a rosary at 7pm at McCaleb Funeral Home. A funeral mass will be held Friday, October 16th at 10am at McCaleb Funeral Home with graveside services to follow at Highland Memorial Park.

Weslaco- Sylvia B. Chavez, 65, earned her wings on October 10, 2020. On April 23, 1955, Sylvia was born to Santos Bazan and Maria Puente Bazan in Weslaco, Texas. Sylvia was the fifth child of eight. She grew up in Weslaco and was neighbors with... View Obituary & Service Information

The family of Sylvia B Chavez created this Life Tributes page to make it easy to share your memories.

Send flowers to the Chavez family.