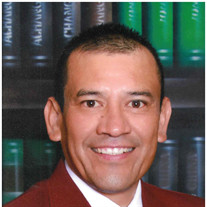 Donna- Albert Sandoval, 56, passed away at his home after a courageous battle with kidney cancer on September 19th, 2021. On December 7th, 1964, Albert was born to Filogonio A. and Sylvia Ledesma Sandoval in San Juan, Texas. Albert was the oldest of four children. They grew up in Donna, and Albert excelled in sports, playing football for the Donna Redskins. After graduating from Donna High school, Albert earned a Bachelor's Degree in Finance from Texas A&M University (Whoop!) in 1988. Immediately out of college, Albert joined forces with his father, Filo, constructing and maintaining swimming pools. All Valley Pools, Inc., was a thriving business in the mid-valley for thirty years. While managing his family business, Albert remained a loyal supporter of his alma mater, both college and high school, as well as his hometown community. Albert was a passionate contributor to his community and, from an early age, always eager to help his fellow neighbor. He lived a life devoted to others and will long be remembered for his selfless acts of service and would give the shirt off of his back to anyone in need. Albert coached Donna Youth Football League and Donna Pony League Baseball for many years. In addition, he served on the Donna School Board for eight years in the ninety's and four more years just recently. Albert Sandoval was a jack of all trades. He was an avid hunter, fisherman, runner, biker, poker player, and of course, a businessman by day. He was also a runner and participated in numerous local runs, and at one point, achieved the ultimate goal of a full marathon, 26.2 miles. Albert will always be remembered for cooking good barbecue brisket, Thanksgiving ham, and ceviche for all family gatherings. He loved watching action movies, college and NFL football, and good old fashioned boxing matches. He also remained very close to his siblings and lifelong friends. In addition, Albert always supported the arts by routinely attending music events and the camaraderie of his friends and immediate family. First and foremost, Albert was a proud dad to his two kids Jonathan and Miranda Sandoval. Albert was recently able to watch his oldest son, Jonathon, graduate from Texas State University. Although his health was deteriorating, he prioritized the trip, and it was one of Albert's proudest moments. He was also a life-long devout Catholic who accepted Jesus Christ as his Lord and Savior. Albert was an active member of St. Joseph Catholic Church in Donna. Albert is survived by his parents Filogonio "Filo" and Sylvia Sandoval, son, Jonathan Sandoval, daughter, Miranda Celeste Sandoval, sister, Melinda Sandoval Sauceda (Simon) of Donna, Felix Sandoval (Selma) of Edinburg, and Hector Sandoval (Mari) of Rosenburg, nephews, Marcus Bo Barrera, Brandon Sandoval, Bryan Sandoval, and Nathan Sandoval, and nieces, Nicole Sandoval and Natalie Sandoval, and mother of his children and friend, Monica Galvan. Visitation will be Wednesday, September 22nd, 10 am-9 pm, with a rosary at 7 pm, followed by a time for sharing stories. This service will be available on www.youtube.com/mccalebfuneralhome.com. A procession will begin at 2:40 at McCaleb Funeral Home followed by a graveside service at 3 pm at Highland Memorial Park and will be streamed at facebook/mccalebfuneralhome.com Serving as pallbearers will be Jonathon Sandoval, Marcus Bo Barrera, Nathan Sandoval, Brandon Sandoval, Bryan Sandoval, Joe Garza, and Felix Sandoval. Contributions to the funeral can be made at https://portal.icheckgateway.com/McCalebFuneralHome/Default.aspx, please note Sandoval in the memo.

Donna- Albert Sandoval, 56, passed away at his home after a courageous battle with kidney cancer on September 19th, 2021. On December 7th, 1964, Albert was born to Filogonio A. and Sylvia Ledesma Sandoval in San Juan, Texas. Albert was the... View Obituary & Service Information

The family of Albert Sandoval created this Life Tributes page to make it easy to share your memories.

Donna- Albert Sandoval, 56, passed away at his home after a courageous...

Send flowers to the Sandoval family.