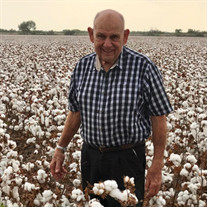 La Feria- Edward Francis Bauer, 86, of La Feria, Texas passed away peacefully in his home on January 24, 2021 with his family by his side. He was born on March 15, 1934, in La Feria to parents, Albert Liberat Bauer and Mary Zimmerer Bauer and was the youngest of eight children. Edward attended St. Joseph Academy in Brownsville, Texas and graduated in 1950. He was raised working on the family farm and developed an intense love of farming at an early age that carried on for the rest of his life. Edward married Mary Ann Wick in 1964. They had five children – James, Robert, Andrew, Amy, and Lori. After high school, Edward briefly attended Texas A & I University in Kingsville where he studied engineering. Before completing his degree, he decided that his true calling lay at home on the family farm. During his 70-year farming career, Edward grew cotton, corn, grain, sugar cane, cabbage, and numerous other vegetables with the help of his wife and three sons. His family liked to tease him that he was “outstanding in his field”—literally and figuratively. During his career, Edward served on numerous boards and committees including the Carrot Committee, the Onion Committee, the Farm Bureau Board, and the Harlingen Irrigation District, where he served for 16 years. He was a faithful servant of the Catholic Church and served as a lector at St. Francis Xavier Catholic Church in La Feria for over 40 years. He was an active member in the Knights of Columbus for many years and achieved the rank of 4th Degree Knight. Edward never met a stranger and ran into people he knew everywhere, even while on vacation. He had a zest for life and greeted those he knew with a smile, big hug, and even bigger pat on the back. Edward was a kind and loving husband to Mary Ann for 56 years and a dedicated father to his children. He was very proud of his children and their families. Edward was preceded in death by his parents, Albert and Mary Bauer, brothers, Isidore, Arthur, Tony, Carl, Albert, sister Regina, and daughter, Elizabeth Marie. He is survived by his wife, Mary Ann, and children James and wife Lois; Robert and wife Cissy; Andrew and wife Mayme; Amy and husband Jake; and Lori and husband Chris. Grandchildren Michael and wife Jacy, Lynda and husband Irving, Christian, Elizabeth, Caroline, Piper, Emily, Justin, Tyler, Grace, Charley, Benjamin, Abigail, and Henry. Great-grandchildren Ronan, Emry, and Maven. He is also survived by his sister, Edna Mitch, and leaves behind multiple cousins, nieces and nephews, and many adored friends. Due to COVID-19, the family is planning a celebration of his life later in 2021. In lieu of flowers and gifts, the family requests that donations be made to the Knights of Columbus (www.kofc.org) or a charity of your choice.

La Feria- Edward Francis Bauer, 86, of La Feria, Texas passed away peacefully in his home on January 24, 2021 with his family by his side. He was born on March 15, 1934, in La Feria to parents, Albert Liberat Bauer and Mary Zimmerer Bauer and... View Obituary & Service Information

The family of Edward Bauer created this Life Tributes page to make it easy to share your memories.

Send flowers to the Bauer family.