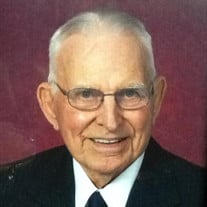 Progreso - John H. Holcomb (Jack), 105, died at his home in Progreso, Texas on October 8, 2021. He was one hundred and five years old. Jack was born march 26, 1916 in Kansas City, Missouri to his parents Blaine Holcomb and Lila Donner Holcomb. The Holcomb family moved to the Rio Grande Valley in the 1920s. In 1933 Jack was the first (and only) student to graduate from Port Isabel High School. He sat for and passes all the tests the state required in order to grant accreditation to the high school. In 1934 Jack met and married Anna C. Bradshaw. They had two children - daughter, Lila Holcomb Bradshaw and son Dr. John A. Holcomb. Jack and Ann enjoyed a lively adventurous life together for over sixty years. Their days were full of family, friends, work and travel that took them all over the world. Farming was a genuine passion for Jack. He served on the Board of Agriculture related organizations like A&M experiment station, the water district, Valeo, The co-op cotton gin and the sugar mill. He was honored to be appointed to the United States Federal Reserve Bank Board. He approached each task with enthusiasm. Jack is preceded in death by his wife, his parents, his brother Blaine Holcomb and his sister Eloise Patrick. He is survived by his two children, his daughter-in-law Jocelyn Holcomb, grand children John Blaine Holcomb, Polly Ann Browning, James Thomas Browning (Wife Maria) Dr. Richard Holcomb (Wife Johnene) Kristine Traylor (Husband Matthew). His great grandchildren include Julie Ann Corey, Kennedy Holcomb, Shaelly Grace Holcomb, Presley Holcomb, Landry Holcomb and Jack Holcomb. Our family wishes to thank Dr. Letticia Volpe for her years of care. Two loyal employees Arturo Correa and Dahlia Lopez were always there for Jack as he aged. Throughout his final illness his granddaughter Polly Ann Browning provided loving care and comfort. Also assisting in his care were the staff of IPH Hospice Melissa, Marsiela, Olga, and Hector. Mandy Hampton was on hand to help in so many ways. Heartfelt gratitude to each of you.

Progreso - John H. Holcomb (Jack), 105, died at his home in Progreso, Texas on October 8, 2021. He was one hundred and five years old. Jack was born march 26, 1916 in Kansas City, Missouri to his parents Blaine Holcomb and Lila Donner Holcomb.... View Obituary & Service Information

The family of John Hubert Holcomb created this Life Tributes page to make it easy to share your memories.

Send flowers to the Holcomb family.