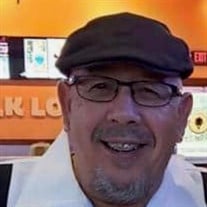 Weslaco: Luis De la Rosa Jr., AKA "Brother Louie," passed away on Friday, February 4th, 2022. Luis was born on July 24th, 1961 to Luis Sr. and Maria (Cavazos) De la Rosa in San Juan, Texas. Luis, his six siblings, and his parents moved to California when he was in middle school. Luis's father worked in agriculture with the kids and decided to start his own farming business, which thrived for many years. Luis was always active in sports growing up, and throughout high school, he played football, basketball, and baseball. He was also a drummer in his junior high band. After graduating from Shafter Highschool, Luis worked with his dad and brothers in the family business for many years. Then, he moved back to the Rio Grande Valley in 1991. On July 3rd, 1992, Luis met his soulmate and life partner, Sandra Leal. They spent the rest of their lives together in Weslaco. Luis was outgoing and had the "gift of gab" and an entrepreneurial spirit. Luis's natural outgoing and friendly personality led him to a career in sales. Luis sold encyclopedias, book covers, Kirby vacuum cleaners, siding, and alarms, to name a few, but he spent a lot of his career selling cars. Luis earned numerous awards such as "Top Gun" at Mid Valley Ford and various other sales awards. Luis also opened a construction company and, most recently, Innovations by Three Amigos. Luis was a great friend and had a heart of gold. He referred to himself as "brother Louie, " which all of his friends called him. It was a name of "trust," "I am like a brother" is what brother Louie meant when he said, "Don't call me Luis, it's "Brother Louie." He referred to many of his friends as "brother" or "sister," a unique and comforting style that will be remembered by all who knew him. Brother Louie lived life to the fullest. He enjoyed a good time, barbecuing, dancing, singing, taking Sandra to concerts, and golfing. However, he was most passionate about sports. Brother Louie was a die-hard Cincinnati Bengals fan, and his prayers for a Superbowl playoff finally were answered. Brother Louie and Sandra set up their garage as a welcoming party spot and called it "Louie's backyard”. They made priceless memories singing karaoke and celebrating birthdays with friends at Louie's backyard. Luis and Sandra shared the same birthday, five years apart. They celebrated together with lots of friends and family and every five years (or milestone birthday), it was a huge party. Brother Louie remained close to his siblings and parents and would visit them in California as often as possible. He and sister Lilly had a special bond, and Luis took Lilly under his wing after their dad passed away a few years ago. They spoke daily, and Lilly joined many of the birthday celebrations. Brother Louie had a love for pets. He always had dogs and treated them like children, taking them on walks several times daily. Louie was very proud of his daughter, Carissa, and grandchildren, bragging about them often. Brother Louie adored Sandra and affectionately called her "his honey ."He wanted everyone to know that Sandra was "his queen." Brother Louie was a faithful Catholic attending St. Joan of Arc for thirty years. Brother Louie is preceded in death by his father, Luis De la Rosa Sr. and his beloved dog, “Buddy”. He is survived by his mom, Maria Cavazos of Colorado, life partner, best friend and "honey," Sandra Leal, daughter, Carissa Lane (Chris) of Oregon, grandchildren, Maximus, Mason, and Olivia Rose Lane, sisters, Maria Pinkney (Rod) of Pennsylvania, Gloria Rodriguez (Francisco) and Silvia Rodriguez (Pablo) of Colorado, Lilly De la Rosa of California, brothers, Roy De la Rosa (Bernice) and Johnny De la Rosa (Rosalinda) of California, brothers in law, Pablo Leal (Nelda) of Houston, Daniel Leal of Weslaco, Eugene Leal Jr. of Austin, David Leal of Weslaco, sisters in law, Gloria Leal of Austin, Mary Aguirre (Guadalupe) of Weslaco, Sylvia Dickens (Dan) of Lake Jackson, numerous nieces and nephews, and his beloved dogs, Mason, Maxwell, and Lexy. Visitation will be Friday, February 18th, 10 am-9 pm, with a rosary at 6 pm followed by sharing stories at 7 pm, at McCaleb Funeral Home. Mass will be celebrated on Saturday, February 19th, at 10 am, at St. Joan of Arc Catholic Church in Weslaco. Cremation and burial will be private. Serving as pallbearers will be Daniel Leal, John Nicolas Zuniga, Roy Olguin, Roy De la Rosa, Johnny De la Rosa, and Pablo Rodriguez Jr., honorary pallbearer will be Chris Lane. In lieu of flowers, the family requests contributions to help celebrate Luis's life, please write Luis or "Brother Louie" in the memo https://portal.icheckgateway.com/McCalebFuneralHome/Default.aspx

The family of Luis "Brother Louie" De la Rosa Jr. created this Life Tributes page to make it easy to share your memories.