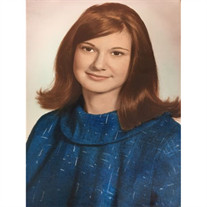 Weslaco- Mary Anne Johnson, 69, passed away on Wednesday, July 12th, 2017 after a long battle with cancer. Mary Anne was born on August 14th, 1947 to John Marvin Clark and Ruth Bell Clark. She was one of six siblings and they moved around quite a bit because her dad was a golf pro. She graduated from Victoria High School. She attended Texas A&I in Kingsville, where she earned her Bachelors degree in biology and chemistry. She also met her future husband, Terry. They got married soon after college on December 27th, 1969. Terry got a job offer at Weslaco ISD about that time, so they moved to Weslaco where they lived the rest of their lives together. Mary Anne and Terry had a full life, though cut too short, they raised four boys and influenced countless children. While Terry was teaching at Mary Hoge/Central Middle School, Mary Anne stayed home to raise the children. She would later become a paraprofessional at Weslaco ISD for seventeen years. Mary Anne retired after seventeen years of service and spent a lot of time with her grandchildren, who were one of her greatest joys. She loved to watch old movies and always had a jig saw puzzle going and loved putting them together. Later in life she became fascinated with genealogy. She spent countless hours researching her and Terrys family trees. Mary Anne was diagnosed with cancer in 2012. She was a fighter and tried her best to fight so she could watch her beautiful grandchildren grow up. She lost the battle surrounded by her family. Mary Anne is preceded in death by her parents, John and Ruth Clark, her son, Randy Johnson, her sister Melissa Clark, her brothers David and Robert Clark. She is survived by her loving husband of forty eight years, Terry, her children, Terry Alan Johnson Jr. (Belinda) of Weslaco, James E Johnson of Weslaco, Timothy S Johnson (Beatriz) of Chugiak, AK, her daughter in law Christie Latigo Johnson of Houston, sister Cherille Mashore (Bob) of Oklahoma, her brother Jack Clark (Sheila) of Michigan, her brother in law, Roy Franklin Johnson of Carthage, TX, her loving grandchildren, Trinity, Emma, Logan, Landon, Natasha, Tabitha, Scarlet, Mia, Shaun, Madelyn, Catherine, and Alyson. Mary Anne will always be remembered as a strong, loving, kind, patient, mother, grandmother, teacher, friend and wife.

Weslaco- Mary Anne Johnson, 69, passed away on Wednesday, July 12th, 2017 after a long battle with cancer. Mary Anne was born on August 14th, 1947 to John Marvin Clark and Ruth Bell Clark. She was one of six siblings and they moved around quite... View Obituary & Service Information

The family of Mary Anne Johnson created this Life Tributes page to make it easy to share your memories.

Send flowers to the Johnson family.