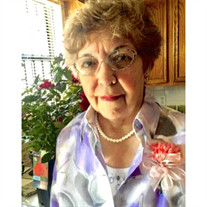 WESLACO - Sara E. Miller, 87, passed away on Tuesday, August 1, 2017 in Weslaco. She was born on on February 9th, 1930 in Edinburg, Texas to Joaquin and Teodoro Cavazos. She had a humble beginning, being raised in Red Gate, one of eight children. She attended Edinburg High School where she graduated in 1948. Sara had to start working at a very young age. Her job in the family was sewing, she became a great seamstress. Around the age of 25, Sara's sister invited her to stay with her for a few days in Weslaco. It was here where she would meet her soulmate, Joe Miller. Sara and Joe would enjoy over 40 years of marriage until his passing in 2000. They had two children, Joe and Linda. They raised their family in Weslaco where they spent the rest of their lives. Many will remember Sara from her thirty five years as a sales associate at JC Penny's. She was a very hard worker and became a great sales person. When Sara was not working, she spent most of her free time helping at the church and gardening. After she retired, she helped with her grandchildren, picking up and dropping off after school. Sara was a talented seamstress. She had a love for animals and the birds flocked to her house, probably because she had a beautiful yard. She and Joe were able to travel to Colorado many times where they had family. Sara lived a beautiful and long life and she attributed this to her daily walk. It was a rare occasion when Sara missed her daily walk. Sara is preceded in death by her parents, her brothers, Salvador, Guadalupe, Santiago, and Robert Cavazos and her sisters, Irena Cavazos, Josefina Calvillo, and Gloria Lane. She is survived by her son Joe Miller and his wife Mamie of Weslaco, his daughter, Linda Ramos and her husband Rick Ramos of McAllen, her grandchildren, Ryan E Miller, Austin Miller, Logan Ramos and Hannah Marez (Ricardo), and numerous nephews and nieces. Sara will always be remembered for her outgoing and fun personality, her commitment to her faith and church, and her strong work ethic. Visitation will be held on Friday, August 4th from 4-9pm, with a rosary at 7pm. Mass will be held on Saturday, August 5th at 10am at St Pius Catholic Church in Weslaco, with interment following at Highland Memorial Park. Serving as pallbearers will be Ramiro Munoz, Kino Cavazos, Tony Perez, Michael Miller, Ryan Miller and Austin Miller.

WESLACO - Sara E. Miller, 87, passed away on Tuesday, August 1, 2017 in Weslaco. She was born on on February 9th, 1930 in Edinburg, Texas to Joaquin and Teodoro Cavazos. She had a humble beginning, being raised in Red Gate, one of eight children.... View Obituary & Service Information

The family of Sara E. Miller created this Life Tributes page to make it easy to share your memories.

Send flowers to the Miller family.